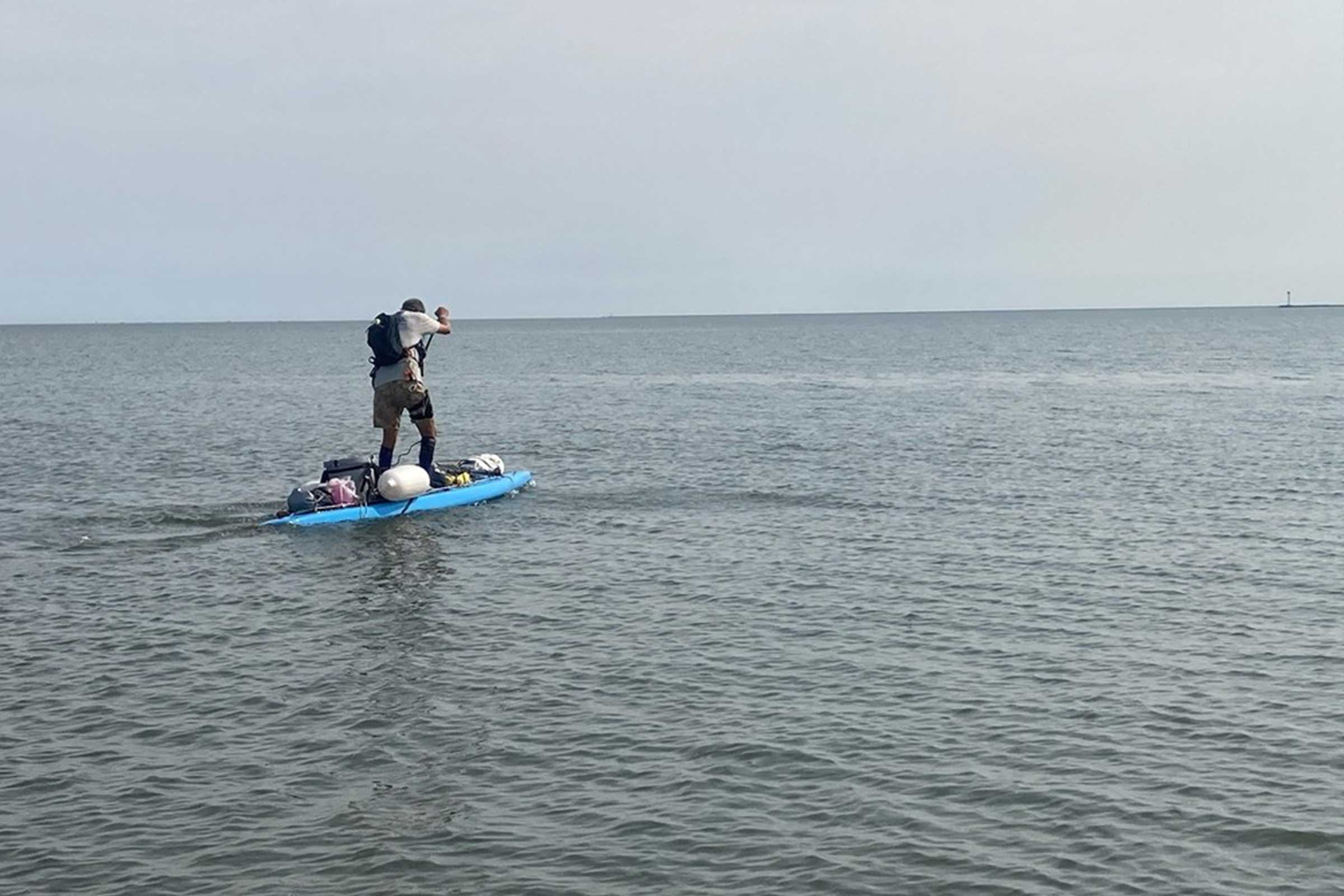 “If you’ve ever been in that hole, you know it’s a scary place. I never want to go back there again.”

Adam Nagler is not talking about being swamped by waves, running ahead of a quickly moving storm, or going without sleep for 20 hours of paddling in high winds. He is talking about depression. Adam Nagler, the man who paddled the ocean solo from the mouth of the Chesapeake to Brant Point in July to raise funds for Fairwinds—Nantucket’s Counseling Center, knows what he’s talking about when it comes to mental health challenges.

Many people still hesitate to discuss their struggles with depression and other psychological issues most of us face during our lifetimes. Not Adam.

Fairwinds is as grateful to Adam Nagler for helping normalize the conversation around mental health as for raising $75,000 for our free and sliding-fee services.

Adam has faced his share of trials. A rare heart infection twelve years ago led to open heart surgery. Four years later, realizing that his physical health was deteriorating, he made a few big decisions.

He started training to take on challenges few people would willingly face. Endeavors requiring toughness, stamina, and endurance that put him firmly in the category of “ultra-endurance athlete.” Among them: a 1,000-mile “Epic,” which involved 150 hours of beach running, mountain biking, inline skating, and stand-up paddling 0ver 10 days; “The One Fifty,” to support Santa Barbara County Search and Rescue followed six weeks later with another nearly 1,000-mile, solo, self-supported fundraiser, the “Strong Island Special.” Prior to Deep Fog Direct, that effort was perhaps his most ambitious to-date. In “Strong Island Special” Adam ran from City Hall in NYC to Montauk (127 miles), then cycled (390 miles), finishing up with a 425 (nearly) round-trip stand-up paddle from the Brooklyn Bridge to Nantucket, with a return to the south shore of Long Island.

None of it done lightly. Most of Adam’s grueling endeavors raise funds for charity, and all of them involve levels of mental and physical training that are themselves intensely demanding.

On day two of Deep Fog Direct, Adam was severely sleep deprived, because the stretch of coast he was paddling (the 100 miles from Cape Charles Light, VA to the Maryland line) is characterized by shoals out two miles from shore and poorly charted barrier islands inhabited only by menacing green and black flies. He set up well beyond the breakers for much needed rest, after putting out his sea anchor and re-checking that his gear was attached to the board. He slept in increments of a few minutes at a time. An hour later, when a wave slammed across his board and sent him into the water, he lost something really important.

His board, now upside down and hard to flip because of the weight it bore, was in line to receive more pummeling from breakers, as was Adam. He did not have much time to rectify the situation amid a swelling sea in the pitch dark of two a.m. with nothing but a headlamp and a chem light to guide him. After several hours of furious paddling through four-foot breakers, he made it to Hog Island, a barrier island off the coast, where he pulled his gear well above the high-water line and slept until first light.

It was an hour or so later, just before continuing his journey, that he realized that the bag containing a month’s supply of his anti-depressant Venlafaxine was full of sea water and all the pills but one— and maybe a half— had dissolved. “I double bag my pills inside the med kit dry bag,” he explained. “But this time it wasn’t enough.”

What does he do with a setback like that? Or with the anxiety that could take over when paddling near a colony of seals, so delicious to sharks? Or the unease when entering a busy commercial shipping lane?

He does with his mind the same thing he does with his equipment. A place for everything, and everything in its place. Adam speaks of his facility for compartmentalizing as an essential skill for this kind of endeavor.

“Checklists give you great confidence. You make sure you go through everything, and tie it down like you always do. I don’t lose things, because I can’t.” In other words, when it comes to equipment status, keeping focused, organized, and rooted in routine is vital to survival.

He goes on to explain that “it’s a mental thing too.” As he paddled north towards Nantucket, if Adam started to get sidetracked by a distracting or unhelpful text message or an unfavorable weather report, he would say, “Enough. Lock it up. Put that in the box. Stay focused on the mission.”

Another strategy Adam uses to maintain mental balance and avoid psychological derailment is to practice intense visualization. He rehearses everything ahead of time in his mind. Over and over again. “I’ve done this so many times that I can access all my equipment in darkness and heavy winds on a big rolling sea. If there’s no moon, and all my lights have flooded or broken, what choice do I have?”

Adam talks about the mental discipline it takes to shut things away in order to be prepared for, and then operate in, worst-case scenarios. “The goal is not merely to survive. The goal is to excel, to be at my very best when things are brutal, and complete the mission.”

For Adam, not only do certain thoughts distract from his focus, they actively harm him if losing focus means losing his way, his equipment, or his life.

“What I need to do is operate well and under all conditions. I can’t think about bad scenarios because then I’m not concentrating on navigation.”

Growing up in a family where being in therapy was seen as a sign of personal strength, Adam had parents who spoke openly about mental health. His strong, brilliant mother was in therapy for years. His own first experience with therapy happened in middle school. He never viewed mental health treatment as a sign of weakness, imperfection, or shame, but something that smart people do in order to live better lives and become better versions of themselves. He also knows it’s a lifeline when things are bad and mental health is failing. Mental health is health, after all, and seeking support when you’re not feeling well is the only logical course of action.

Though there were several challenging moments during Adam’s journey to Nantucket, he explains that hard times (what others might see as scary moments) almost always make him stronger. “I’m good at finding last minute solutions to seemingly impossible problems.”

Part of the planning for this trip included scheduled check-ins every six hours via satcomm text with Adam’s close friend and on-land right hand man, Kyle Collins. Adam reported his mental, physical, and equipment states to Kyle by giving them grades. “I don’t think I went below a C more than twice during the expedition.”

What did Adam do to resolve the lost medication dilemma? What could he do? He took the last one and a half pills of his one-month supply— and paddled. He hoped a day and a half of meds would get him to Assateague Island, which was about two days away. He did what he does best—called on his inner strength, compartmentalized his worries about coming off his medication cold turkey, and leaned in.

Coming from the south in front of Hurricane Elsa, Adam made his way through Chincoteague Inlet. “It was blowing stink. The storm was coming.” He checked the chart for the Coast Guard station and headed for it.

There were several Guardsmen working on the dock. “I asked them two questions. The first was, ‘Can I stay here till the storm passes?’ and the second was, ‘Is there a pharmacy on the island?’’’ He got a no and a yes. After tying up his board at a public dock he headed for the pharmacy straightaway, unshod, his feet too swollen from cellulitis to fit into even a pair of flipflops.

He walked the six blocks to the H & H Pharmacy and made his damp, exhausted, barefoot entrance, wet suit still dripping, a huge hydration and equipment pack strapped to his chest, including knives, radios, and compasses. He was concerned that he cut an alarming—if not menacing— figure, but they said, “Don’t worry about it—come on in. We can help.” He explained the story—his journey, getting swamped, losing his meds several days before. They gave him a five-day supply on the house.

Adam has friends, people he describes as smart, thoughtful, and educated, but who question his need to take an antidepressant. Though they have no personal experience of depression, or because they took a different route regarding their mental health challenges, they judge his choice.

Adam believes that his underlying genetic propensity for depression was triggered by 9/11. After that shock to the country’s system, he plunged into a scary dark place, and was stuck there for what seemed like a long time. He immediately sought help, but finding the “right” solution took time. Over the years since, he has remained on Venlafaxine, with adjustments in dosage along the way, and never looked back. He may have moved some of his hesitant, disapproving friends toward a better understanding of mental health as a function of health, but some, he fears, will never understand. He does not let it bother him.

Adam proves what those who understand mental health disorders know—that challenges with mental health have nothing to do with strength, intelligence, drive, passion, curiosity, determination, compassion, courage, or any of the other things that make us human. However, depression, anxiety, and other diagnoses can make it hard to give full expression to those things. By seeking therapy and going on an anti-depressant, Adam released himself to be able to pursue his dream. A dream he amusingly dubbed his “This-is-50 Sufferfest Tour” —his personal challenge to “crush younger versions” of himself.

When Adam set foot on the beach at Brant Point on July 27, the people on shore to greet him had little idea of what he’d really experienced on his journey. But they knew enough. He’d done something huge. He’d inspired them. Before he even started, Adam had hoped he could leverage that feeling in others to inspire donations to Fairwinds as well. And that plan worked brilliantly. His unfolding story also inspired the Clausens, Mary Davis and Mark Clausen, to match donations to help Adam blow well past his fundraising goal. He did so by more than double, channeling funds to Fairwinds to support community members who are struggling and who cannot afford to pay for the cost of treatment.

Now readers can find inspiration yet again, in Adam’s openness about his own struggles with depression over the years, his determination not only to “find the outer limit of his body and mind,” but also to stamp out disparities in access to mental health services and spread the good word: your mental health is worth everything.

JOIN THE CONVERSATION ON